The Hawkesbury River and its tributaries encircle Greater Sydney on the north side. It skirts Sydney from the foothills of the Blue Mountains (near Penrith) in Sydney’s west all the way round to Broken Bay, near Pittwater in Sydney’s north. This magnificently scenic and beautiful river starts where the Grose and Nepean Rivers join at Yarramundi near Agnes Banks and flows 145 km through the many towns and villages along the valley until flowing into the Pacific Ocean at Broken Bay. Yarramundi Reserve (78 ha) with its natural setting is popular for outdoor activities including picnics and family gatherings. Drifting on inflatable rafts on the Grose River past Yarramundi towards the Hawkesbury River is an enjoyable experience.

With the Blue Mountains, a rolling landscape, and river geographical features as its backdrop, the Hawkesbury Region is a picturesque area of rural and residential lands. Soon after being settled by Europeans, it became an important farming area and was the ‘food basket’ for the first settlement at Sydney Cove. In these colonial days, the Hawkesbury River was the transport route for produce being delivered to Sydney Town and vice versa. The Aboriginal peoples of the area have always valued the river, and what we call Windsor today was an important meeting point.

Food production is still an important feature of the Hawkesbury River catchment and includes family-run farms. Bilpin is Sydney’s apple and stone fruit capital and Windsor is Australia’s mushroom production capital. Hawkesbury Harvest Farm Gate Trail will help you to discover local producers who offer farm gate sales of properly ripened produce. Combine this with The Artists Trail to follow in the steps of the Masters who painted the Hawkesbury River area.

The popular Hawkesbury Agricultural Show, first held in 1845, is held annually in the autumn at the showground at Clarendon, between Windsor and Richmond. Contact the Visitor Information Centre for details on how to organise your Hawkesbury Harvest and Hawkesbury Show adventures or go to www.hawkesburyharvest.com.au and www.hawkesburyshow.com.au

Go to the markets

The towns of Windsor, Richmond, Pitt Town, Ebenezer and Wisemans Ferry are located in the middle and upper reaches of the river and have many fine examples of buildings the early days of European settlement and they retain their sense place in their landscapes too. Many of these buildings are in use today as private residences and for business activities. History buffs should also explore church graveyards, as they are great places for insight into the region’s history. Richmond Park has a fine 19th century restored sports oval, where many a cricket match has been played. It’s in the centre of town and is a heritage item. 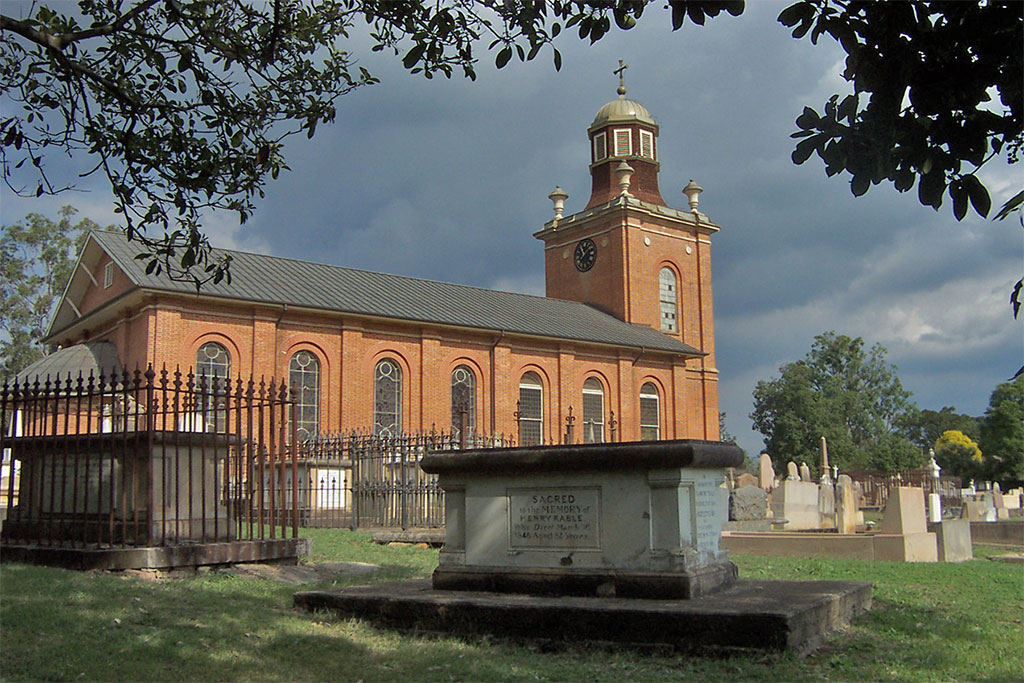 The historic towns of Windsor and Richmond have antique and craft shops, galleries and shops, restaurants, clubs and pubs to visit.
The award-winning Hawkesbury Regional Museum and Hawkesbury Regional Gallery in Windsor have permanent and changing exhibitions. www.hawkesbury.nsw.gov.au

More about the Hawkesbury Gallery

Don’t forget to visit St Albans’ historic Settlers Arms Inn. From Windsor, you can take the Hawkesbury’s the Blue Mountains drive along the picturesque Bells Line of Road through Kurmond, Kurrajong Heights and Bilpin to the ‘cool climate’ garden of The Blue Mountains Botanic Garden at Mt Tomah. www.bluemountainsbotanicgarden.com.au

Go to the gardens

Along the way, call into roadside shops and stalls for local seasonal fruit, refreshments and other products.? Include the Kurrajong Radio Museum in your journey, it tells stories on the history of radios in Australia and has been on the ABC TV Collectors show. www.vk2bv.org/museum

Listen for bellbirds around Bellbird Hill and stop to hear them at the Bellbird Lookout. At the lookout, also see how the Hawkesbury region is a large part of the Greater Blue Mountains Drive (see sign). Bellbird Hill Lookout, Hawkesbury Heights Lookout, and Streeton’s Lookout provide excellent views of Greater Sydney across the Hawkesbury River and its floodplain to Sydney CBD on the horizon.

The new viewing platform for Windsor section of Hawkesbury River (Windsor townships side of the river) is another way to appreciate the role of the river in the Hawkesbury way of life, being so close to the town. The River is the focus for water activities and sports, with annual “Bridge-to-Bridge” events (waterskiing, powerboats, kayaking). www.waterskinsw.com.au

The Convict Trail, part of the Great North Road, is a great walking and history experience near Wisemans Ferry on the way to St Albans and is part of the Convict World Heritage listing. The Great River Walk is being developed to provide locals, visitors, and tourists with walking and cycling experiences along the extent of the Nepean and Hawkesbury rivers.

The upper parts of Hawkesbury River is about 1 hour’s travel from Sydney (to Windsor, similar to Penrith) and a little more for villages along the river, depending on where you are heading. Windsor and Richmond are interchange points for travel between Sydney and the Blue Mountains, Central West and Hunter regions too. The Hawkesbury region is a great day out and overnight destination, so plan ahead and stay a while exploring the river, towns, and villages.

History SnapShot:
Governor Lachlan Macquarie, the fifth Governor of the Colony of NSW from 1810 to 1821 named five towns in the Hawkesbury River region – Windsor, Richmond, Pitt Town and Wilberforce, and nearby Castlereagh (near Penrith Lakes).

Explore these historic towns and villages as part of a trip to the Hawkesbury region – Sydney’s River of Life.

Get the Macquarie Trail brochure from the Visitor Information Centre.