THE PARRAMATTA RIVER rises in the hills northwest of Parramatta and flows to Sydney Harbour. For over 200 years it has been Sydney’s central waterway.

Long before European settlers, it was well known to aboriginal people as a source of food and transport.

Many of Sydney’s suburbs are nestled along its banks, its tributaries and bays. From the former working class, but now gentrified suburbs of Balmain, Birchgrove, Rozelle with their myriad of restaurants and on to SYDNEY OLYMPIC PARK, RYDE and PARRAMATTA.

Canada Bay, on the foreshores of Parramatta River, is named after Canadian rebels, deported to Australia following the Canadian Revolution of 1837-8. 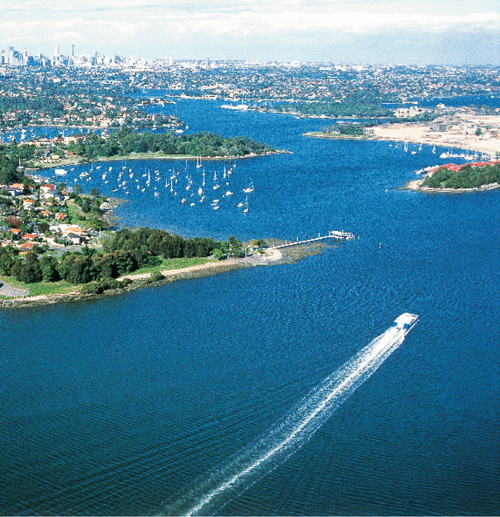 The Parramatta River looking from Ryde to the Sydney CBD

The picturesque LANE COVE RIVER is a tributary of the Parramatta River, winding through a peaceful bushland valley. The river is the focus of most activities in Lane Cove National Park where you can stroll along the bank, hire a rowboat, picnic or stay overnight in the nearby Lane Cove River Tourist Park. Tel: (02) 9888 9133

RYDE (link) is the link between the Lane Cove and Parramatta Rivers. There is an amazing number of bays, picnic or fishing spots from Putney through to Henley on the Parramatta River, which serves as Ryde’s southern boundary.

Wander through picturesque Hunters Hill peninsula and Woolwich. But don’t miss the Granny Smith festival held in Eastwood in October of each year.

Cross Parramatta River on the Putney/Mortlake Punt and on to Homebush Bay. Chosen as the site for the Sydney 2000 Olympic Games because of its centrality and easy access by road and public transport, Sydney Olympic Park (link) now provides visitors with a wide range of attractions and a choice of activities, including tours of venues that hosted the world’s athletes.

By far the best and most relaxing way to see Parramatta River is from the Parramatta RiverCat from Circular Quay. You will pass some magnificent waterfront homes, rowing and sailing clubs and historic buildings. Tel: 131500 www.131500.com.au 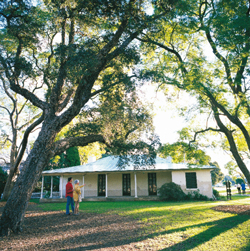 The RiverCat from Circular Quay terminates at PARRAMATTA, one of Greater Sydney’s commercial and retail hubs. Parramatta is nationally significant as an early seat of government and commercial activity.
Steeped in early European history, Parramatta is where you will find the World Heritage Listed Parramatta Park and Old Government House as well as historic houses, all of national significance.

The first successful crop plantings in the early colony were in Parramatta and the Australian wool industry had its beginning here too.
Today Parramatta is shaped by many cultures and this is reflected in the diverse range of restaurants, cafes and alfresco eateries to rival anything in Greater Sydney.

Themed Self Guided Tours help you explore Parramatta, its art, architecture and indigenous and colonial heritage.